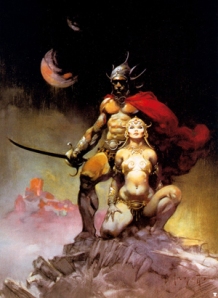 For reasons unknown but, I’m sure, understandable, I rarely take too much notice of the posts on agency movements on Nikki Finke’s blog. However, thanks to Brendon Connelly over at /Film, I must now purchase a reasonable size cloth to wipe the egg from my face. Finke’s pointed out in the past week that Chabon, the author of the Pulitzer Prize-winning Adventures of Kavalier and Clay, has been tapped to do some writing revisions on the script for John Carter from Mars, the first live-action effort coming from Wall-E director Andrew Stanton.

This has now been confirmed by fansite The Amazing Website of Kavalier and Clay which managed to get the truth from the proverbial horse’s mouth. Chabon said he had been hired to do “some revisions” on the current script written by Mark Andrews and Stanton, described by Chabon as “already strong”. He goes on to say:

“I wrote my original screenplay The Martian Agent back in 1995 because I wished I could do [Edgar Rice] Burroughs’s Barsoom. So this is pretty much a dream come true for me.”

This is suddenly shifted into gear to a very highly anticipated, if somewhat far-off future project. Stanton’s presence as director already intrigues, as do his statements of intention, while any chance to view the Pixar directors moving into live-action cinema must be met with, at bare minimum, a healthy curiosity. To have Chabon now working on the crew seems a coup, especially given his above stated love for the material. His work on Spider Man 2 was pretty marvellous from what I can gather and was a key driving force behind the quality of that movie.

Chabon himself has recently seen his Mysteries of Pittsburgh adapted and finally making it to DVD screens across the land, although seemingly with a minor, but still galling, level of failure. His Wonder Boys was taken on in the early part of the millennium and made into a very decent movie with Michael Douglas while Kavalier and Clay, easily his most celebrated work, is a long-gestated project in Hollywood (and had been under the dispiriting control of Reader-director Stephen Daldry) which may never make it to the screen, although doing justice to the novel would prove difficult anyway (mini-series?). Probably next will be the Coen brothers’ version of his The Yiddish Policeman’s Union, a quirky Jewish-angled take on the hard-boiled private eye pulp novel.

Back to the key issue though, John Carter from Mars sounds pretty marvellous so far, even though we won’t see it until 2012. For my money, it’s always worth getting excited about anything which could involve a Pixar directing genius and one of the best authors of his generation. Don’t you agree?