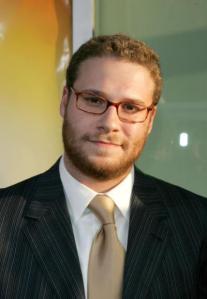 The Spaced pair wrote and will star in the film about two sci-fi nerds who embark on a road trip and encounter an alien, called Paul, who has escaped from Area 51.

The alien is to be voice by Rogen, fresh from his excellent voice-acting work in Monsters vs Aliens, with Superbad and Adventureland director Greg Mottola helming the project.

I’m a huge Pegg-Frost fan, so much so that their upcoming appearance in Spielberg’s Tin Tin film has got me excited for that project, long a ‘meh’ for me. Their work together in Spaced is of modern British comedy legend and while Hot Fuzz isn’t as consistent as one might hope, Shaun of the Dead is a bona fide slice of zom-com mastery.

This, with all of those other added, is now sounding like a saliva-worthy project.