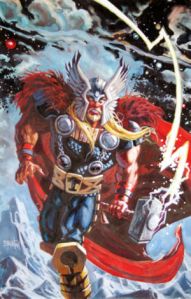 Much rumour rising about Marvel adaptation Thor with Alexander Skarsgard being touted for the lead role. He brilliantly played Brad Colbert in David Simon and Ed Burns’ Generation Kill and is currently in Tru Blood. Separately to that, the film joined Captain America and The Avengers in being pushed back in the release schedules with 2011 now housing Thor, Captain America and Spiderman 4 within three months. In further Marvel news, Mickey Rourke has signed up for Iron Man 2 along with Scarlett Johansson, the latter replacing Emily Blunt as the Black Widow. As if not to be outdone, this week also saw rumours sparked of a possible reboot for the Fantastic Four series.

Juan Antonio Bayona, the director of the excellent The Orphanage, has reportedly been signed up to direct the third Twilight movie. This comes hot on the heels of previous rumours that Drew Barrymore was a candidate to helm the movie. I don’t care a huge amount, but if we are going to have to live with these movies for the coming two-and-a-half years, it would be nice to have some real talent behind the camera. Other reports though suggest that it will be directed by the other Weitz.

Sam Raimi’s return to the horror genre with Drag Me to Hell has a trailer; Axel Foley could die in Beverley Hills Cop 4; Nick Nolte and Tom Hardy will star in a mixed martial arts movie. Oh yeah!; Bryce Dallas Howard has expressed an interest in bringing the Luna Brothers’ The Sword to the screen; Heathers has been jumped into gear in musical form; Robin Hood has found his merry men.