Odeon/UCI back down in Alice in Wonderland dispute

The news that Odeon had refused to show Alice in Wonderland was discussed earlier this week, dependent on your viewpoint the good/bad newsis that the cinema chain announce today that they now WILL be showing the Tim Burton remake after an agreement was struck between the two parties. Full story here.

Cooper chooses another hangover over war

Looks pretty pointless and in parts looks like a shot for shot remake. Also features the most ridiculous villain voice since The Punisher.

A shortlist for Paranormal Activity 2 directors is announced….

…. and there is one definite surprise in Brian De Palma. While I would be interested to see what the Scarface director would come up with, my inclination is with Brad Anderson, the director of two fantastic films Session 9 and The Machinist (possibly Christian Bale’s best performance). Full shortlist here.

This is something I am completely on board with. While he was in the Scary Movie series, White Chicks and Little Man, it’s easy to forget he was also fantastic in Requiem for a dream. I had him down on my list for  “Actors We Could Make Great” and I think this could be the film to do it. In this article with the LA Times, Marlon defends some undefendable films, talks about getting the role ahead of Eddie Murphy and discusses why Pryor deserves a film about him. Note: White Chicks and Little Man grossed $215 million in total and a White Chicks 2 is on the way.

Zach Galifianakis is a miracle worker!

He must be, he carried everyone in The Hangover! Galifianakis is set to star in a supernatural buddy comedy (might sound like a made up subgenre, but check out the fantastic The Revenant when it finally manages to get released – makes Shaun of The Dead seem as funny as Epic Movie). Will be good to see ZaGa (it may catch on if I use it enough) shake his comedy muscles and no doubt I will be completely onboard by the time a director is announced.

It’s only fair to talk about another awards ceremony at this time of year, one which has managed to maintain its staunch anti-commercial stance and has never sacrificed its history to allow higher-grossing films into its top categories. This is partly because the films which tend to get given Razzies are often seen by millions of foolish people, a pattern which dictates future movie release schedules and therefore repeats the feat, making more bad movies which more people see and therefore perpetuating the need for the Razzies.

This year’s bunch, in full here, are particularly righteous, with Land of the Lost and Transformers 2: Revenge of the Fallen leading the ignominious. So, a few bulleted thoughts on the nominations:

As it’s the end of the decade, they’ve also released their nominations for Film, Actor and Actress of the Decade, worst that is. My predictions and views are below. 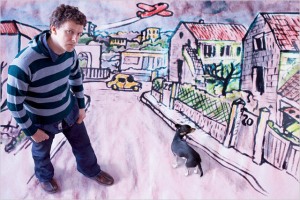 Michel Gondry has been signed up to direct The Green Hornet, the crime-fighting comic book adaptation starring Seth Rogen and Stephen Chow. Chow had been signed up to direct but later dropped out over what were described as ‘creative differences’. Gondry’s presence makes this easily the most interesting comic movie on its way at present. I may not have fully loved Be Kind Rewind, but Eternal Sunshine of the Spotless Mind is one of the best films of the past ten years while Science of Sleep is an endless well of whimsy and imagination. Notably, the news was first reported on the Twitter feed of Production Weekly. Also, the trailer for Rogen’s new movie, Observe and Report, has emerged and looks like something of a departure for him into a slightly darker area.

Entertainment Weekly is reporting that Drew Barrymore, she of the adorable poppet-ness, is among the candidates being considered for Eclipse, the third movie in the Twilight series which will follow up the next instalment, New Moon, in 2010. Barrymore has recently signed off on her debut in the chair, Whip It, starring Ellen Page.

Eddie Murphy has apparently signed on to play Richard Pryor in ‘Richard Pryor: Was It Something I Said’ for director Bill Condon. It will reunite the pair who worked together previously on Dreamgirls, the film which garnered so much buzz for Murphy and won him an Academy Award nomination. Seems like a strong part for him given the placement of Murphy as the next in line in succession in the evolution of black comedians after Pryor and preceding Chris Rock.

Cate Blanchett has signed on the dotted line to play Maid Marian in Ridley Scott’s Robin Hood. This news follows that from last week that Scott has changed the name and vision behind the project to a more straight-forward retelling.

Samuel L Jackson is to play Nick Fury in Iron Man 2, Captain America, Thor, The Avengers and, possibly, in a Nick Fury movie should Marvel decide to do this too. There had been issues over Jackson joining in the past but now it seems such things have been pushed aside for the sake of continuity.

Will Ferrell and Mark Wahlberg are to team for The B Team, a comedy from Adam McKay which will follow the misadventures of two mismatched cops. Sounds like it be in a similar vein to all other Ferrell/McKay projects and have around four very funny Ferrell moments, almost no story and an effort to make up for any shortcomings through shouting.

Sean Penn and Naomi Watts are involved in talks for Fair Game, not a remake of the Cindy Crawford-starrer from the mid90s, but a drama about the outing of CIA agent Valerie Plame Wilson. It would reunite Penn and Watts from when they starred together in the Innaritu/Arriaga piece 21 Grams, a role which won Watts a Best Actress nod at the Oscars. Fair Game will be directed by Doug Liman.

Joss Whedon has spoken out during an interview with Maxim on why many DC comics adaptations are having difficulty in getting to the big screen, including Wonder Woman, which he was often linked with in the past. Whedon said the difference in the era in which the DC comics were made meant that the heroes were not being created as people, but as gods. ‘DC’s characters, like Wonder Woman and Superman and Green Lantern, were all very much removed from humanity. Batman was the only character they had who was so rooted in pain, that had that same gift that the Marvel characters had, which was that gift of humanity that we can relate to.’ Whedon has long been working on getting Wonder Woman off the ground with Eliza Dushku in the lead. Personally, I’m not a big fan of Dushku’s acting so I’d put forward Morena Baccarin of Firefly and Serenity fame instead. Probably wouldn’t get made either way though.

Also in the news: Emily Blunt will definitely not be in Iron Man 2, instead she’ll have to star alongside Jack Black in Gulliver’s Travels; Mel Gibson’s The Colonel has a trailer; Jim Carrey and Jake Gyllenhaal are to star in a remake of Damn Yankees; Naomi Watts and Freida Pinto have joined Woody Allen’s next movie; Warner Bros has picked up the rights to adapt comic series Suicide Squad; The Coens have directed a 30-second commercial mocking the claim of clean coal; Gore Verbinski is to bring Clue/Cluedo to screens; Seth Green will star in animated caper Mars Needs Moms!; Ed Helms is to write and star in a Civil War-themed comedy; Danny Boyle and Dev Patel may take part in the real-life Who Wants to be a Millionaire; Peter Baynham, a collaborator of Sasha Baron Cohen on Borat, will write the Arthur remake for Russell Brand;