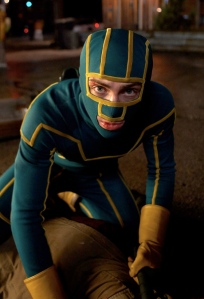 Kick-Ass is undoubtedly a truly fun experience for watching. It’s filled with stabs of smart, profane humour and knowing touches and nods to inspirations peppered throughout. The performances, particularly from the future superstar Aaron Johnson and the ridiculously precocious Chloe Moretz are superb. The action sequences, though occasionally creaking under budgetary concerns, are packed to the gills with energy and kineticism. They may occasionally lose touch of themselves, but they have a slick vein of humour that drives all the events which occur.

But… I have seen precious little comment about the way that the violence is depicted, not on an aesthetic level but on an emotional, consequential level. As with Wanted, also based on a Mark Millar graphic novel, Kick-Ass revels in the violence and killing perpetrated by both the good and bad guys. We are consistently told to chuckle at the ultra-violent content, including a man exploding, one being eliminated in a car crusher and numerous splattering headshots.

I’m not preaching that this is necessarily wrong, director/writer Matthew Vaughn and co-writer Jane Goldman are going for something, and they mostly succeed. This is supposed to be a post-modern superhero story which nods and winks at its knowing, desensitised audience. You could even make an argument that the film is so arch as to be specifically pointing out this macabre sensibility in its audience, akin to Haneke in Funny Games, but I don’t think that’s where is going. If so, this is a film which has its cake, the person’s next to it and then eats everyone’s.

The killing that happens is so fetishised and so cheered it’s very hard to feel anything but a little discomfort at what you are seeing. There would appear to be a stupefying lack of emotional consequence to the violence which happens, even though much of the violence which happens is driven by emotional concerns. Sure, the Hit-Girl and Big Daddy characters are seeking revenge, but shouldn’t there at least be a slight acknowledgement in Hit-Girl’s character of the amount of murder she takes part in? Many of the human characters in the film, henchman though they may be, are dispatched with such a sense of glee, with no remorse or consequence for the perpetrator. There is no recourse to the violence, it just happens and we are supposed to cheer and laugh. It may be in a comic-book world, but there just seems too much having and eating of cake going on for me.