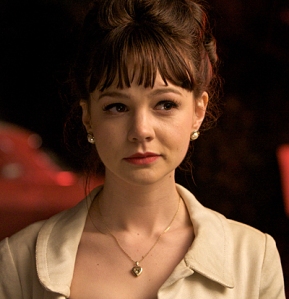 Okay, let’s get going. This undoubtedly to be the most interesting category of the lot, if interesting for you is having four possible winners. A couple of months back, I was pretty sure that Carey Mulligan was a shoe-in to win this – she had all the momentum and buzz to get her over the line. Then things started to shift and, as I said, I think there are four possible winners here. Before we kick off then, let’s just say, Helen Mirren won’t win.

Bullock would not have registered even as a possible on the radars of critics or speculators until The Blind Side seemed to be positioned as the popular-choice test case for this year’s expanded ceremony. I haven’t seen her in the film, so she may be deserving, but the reviews and promotional material indicate a soporific, TV-movie style rags-to-riches story about white guilt. I would still be surprised if she won, despite her win at the Golden Globes, but I wouldn’t count her out either.

Streep is so constantly good that she essentially gets nominated every year. The difference is that this appears to have been acknowledged this year. People has started saying that she has lost out for a long time and hasn’t been rewarded since Sophie’s Choice, despite now having twelve nominations since. It could be the year to change that.

Gabourey Sidibe is probably still an outsider to win, but the splitting votes between Streep, Bullock and Mulligan could see her take a surprise victory. Precious has lost a little momentum since its first release and Mo’Nique is definitely going to win a prize, so Sidibe is unlikely but possible.

Carey Mulligan though, despite all above, remains the favourite. Her performance in An Education is superb and though her BAFTA was wholly predictable, she was worth the win and may just walk away with the big prize too. Working against her is the possible vote split and the lack of enthusiasm for the film across other categories. Any sense amongst voters of the film needing at least one reward, however, should stand her in good stead.