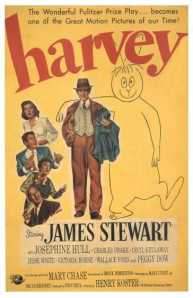 I was recently rewatching the two-hour documentary on the Jaws DVD which gives a pretty comprehensive overview of the making of that film. The absolute key result of watching this documentary, from my end, is that Steven Spielberg is a complete filmmaking genius. Whether you think Jaws is glorified B-movie nonsense. Maybe you think he’s a commercial whore, a populist monster only really concerned with making money. You shouldn’t, but maybe you do. No matter any of that, you surely can’t deny the brilliance of his best work.

Those days are definitely behind him now and today’s news that the man is to direct a remake of Harvey, the James Stewart-starring whimsical alcoholism classic, must near bring tears to the eyes. I have often said on this site and on our podcast, that remakes are not all that bad. The problem is that remakes should only be undertaken when the original film went wrong. If that original has something great in its conceit, but the execution went array, then by all means, try again. But, although Harvey is not perfect, there is no place for a remake of this film.

But, it’s happening. So I’m going to try and embrace this. As Drew McWeeny writes in the HitFix article linked-to above, this is a vehicle for Tom Hanks if ever one has been created. So, let’s just look forward to a charming Hanks performance, grin and bear it.